This blog briefly records the four industrial revolutions over the last 500 years. How we went from assembly lines to a major transition to digital production worldwide. How Technology is no longer a quality in itself, but quality is the service it provides.

Revolution - the first thing you think of when hearing that word is probably not sensors and robots. You might be thinking of a forcible overthrow of a government or social order, in favor of a new system. It begins small and slowly creates a change in people's consciousness and it rarely happens overnight. The fourth industrial revolution is just that –an all-encompassing change on the horizon, just in a more technological kind of way.

We must go back 500 years, when man transitioned from hand-crafted production methods to machines powered by water and steam. This is what we call The Mechanization revolution. Then, in the 18-1900s came the second industrial revolution, The Industrialization, where we experienced the first factories and assembly lines. Next came the third revolution around 1980s, The Automation, in which robots operate in line with the workers in manufacturing.

Today our hydropower, assembly lines and robots has reached such a level of maturity, that a new revolution is needed if we are to further advance the industry. Hence, we have now entered the fourth industrial revolution. The fourth industrial revolution covers the rapid development of digitization, robotics, sensors, big data, the Internet of Things, autonomous vehicles, 3D printing, biotechnology, artificial intelligence and energy storage.
Humans and technology
Major changes are coming within the interaction between humans and technology - not only in the production itself, but also in relation to users and customers. It places demands on companies: Should the business be adapted or radically reimagined? The industry opens up the possibility for some tasks can be completely taken over by technology, while others can be redefined to create more value for users and customers. But it is ultimately a choice that the individual company and organization must make. 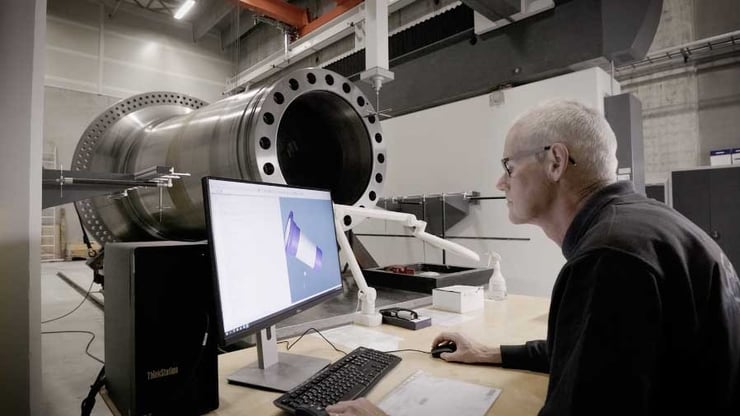 At Multicut we don’t need assemblylines, we use modern machines, software and people with the right competences.
All of this, places new demands on companies as well as on employees and their competencies, and it is associated with opportunities and challenges. For inventors and innovators, the idea of having to produce vast quantities of their prototype may seem like something that’s far off in a distant future. But one day, if all goes well, that future becomes the present – and then what? Then We recommend that you team up with producers with scalability as soon as possible in the process of your development.
Add value to your tech
Industry 4.0 means that industrial strength - competitiveness - shifts its focus from the ability to exclusively manufacture faster, better or cheaper to the ability to translate products and processes into digital formulas and distribute these formulas as services and add more value to your product.
Multicut operates several fully automated production lines, in which robots are in charge of picking and placing tools in the drilling/milling machines, collecting and placing raw components, and completing all milling and cutting operations in our Mazak machines -all with minimum human interference. Our technology adds value by reducing production time while maintaining consistently high quality in every single component, and our automated production lines are capable of running around the clock all days of the week. That means: Quality assurance with zero compromise.